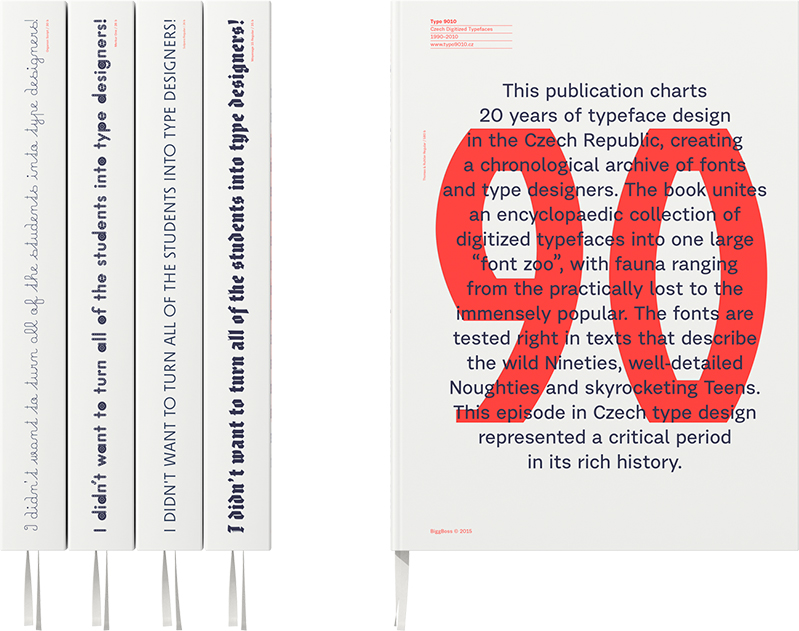 Typo 9010 unites an encyclopaedic collection of Czech digitized typefaces starting from 1990, a time when computers were starting to replace phototypesetting and copying letters by hand, and ending with 2010, when almost a dozen small type foundries were operating in the country.

Short texts by Czech and international typographers describing the atmosphere of the times are distributed throughout the book, which aims to present Czech type design and its digital beginnings in as much detail as possible while placing it into an international context.

20 years of digital
type design in the Czech Republic

Over the past twenty years Czech type designers have created a number of widely popular typefaces – plus tonnes of designs that got lost, have remained tucked away in desk drawers or have been stored in a long-forgotten format on a few floppy disks.

We tried to track down as many as we could. If needed, we renovated the original digital files and created useable font files from them. Then we arranged this collection of typefaces into a book that acts as a sort of typeface specimen.

Many of these typefaces hold their own unique stories, and you will learn about several of them in the accompanying texts.

The book has been released on 8 December 2015 in Prague.

Do you want to offer
the book in your store?

Ordered books will start to be sent out on 6 December 2015.
The book was officially released for sale on 8 December 2015.
Postage is based on the Czech Post price list.

Typo 9010 is a bilingual publication
(English and Czech).

Financial support for
the publication of this
book has been provided by
the Academy of Arts,
Architecture and
Design in Prague.